Whether aboard our 106’ Sloop Clearwater, our 26’ garvey Pete’s Banjo,  or our network of sail-based partners, sailing is in Clearwater’s DNA. 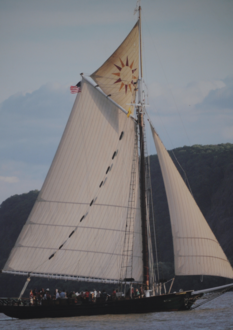 Education is mandatory to change people's attitude toward our past ecological mistakes and point the way toward sensible management of our natural resources.

Our Clearwater Festival is NJ Friends of Clearwater's annual open-air music festival celebrating the spirit of people working & singing together for the environment. It has been the networking hub for sharing and promoting new ideas  on Environmental and Social Justice for almost 50 years! ​​​

Clearwater was literally founded and funded by music. Both before and after the Sloop was launched, members held house parties, concerts up & down Pete's dirty stream the Hudson. After the Sloop Clearwater was launchd in Maine, almost every port along the East Coast was visited by a concert until the triumphal docking at South Street Seaport in 1969*.

behind Pete for the premiere].

​JOIN US FOR OUR FREE

Since 1974, this organization has been actively educating children and adults on the importance of clean, clear water and to urge citizens to be responsible custodians of our domain: the estuaries of the Raritan, Passaic, Hudson, Delaware, and other NJ Rivers; the Jersey Shore coastline and its inland waterways; and the land of New Jersey.

​Our Credo: It is the aim of New Jersey Friends of Clearwater that each member in their own way touch the people immediately surrounding them and in their community, and by word or deed convey the importance of conservation and reparation of the earth.

​​​​WE NOW KNOW THE LENGTHS OUR REPUBLICAN SENATORS AND SCOTUS WILL GO TO DENY CLIMATE CHANGE.​

NJFC CLEARWATER FESTIVAL IS BACK FOR 2022 IN RED BANK ON THE RIVERSIDE!!!

We Also Invite Back Our Green Vendors, Our Crafters, Our Commercial Vendors, and of course, Our Food Vendors, including a Limited Number of Food Trucks at  our Scenic Riverside Gardens Park Venue!

​​​​Applications are Now Available for Downloading Below or On The Festival Webpage!​